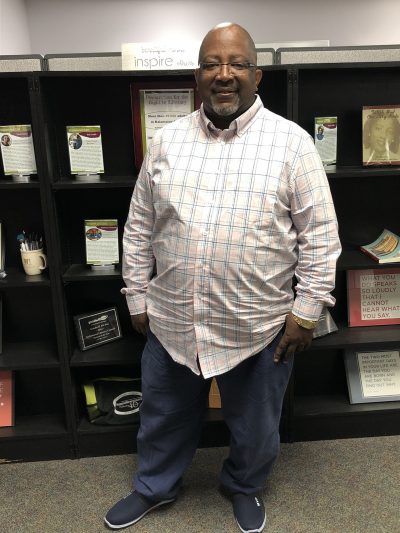 Rodney is a KLC learner who recently came back into service. Originally from St. Louis, he’s been in the Kalamazoo area for 20 years. Growing up in a family of 10, Rodney’s early path in life was rocky. He spent many years in the streets and ended up incarcerated. While there, he was able to reflect on himself and his choices. After several tragedies, including the loss of his mother and son, he vowed to do better and spend time with more positive people who could help him make better choices.

While working at Goodwill Industries, Rodney decided to pursue his GED. However, he had difficulty with learning due to an injury he suffered in 1996. He realized he needed help with literacy skills first, so he came to us. He says he was a “ball of confusion” and needed help finding his way. Rodney was the first learner in the Reading Center at Goodwill. Shortly after coming to the KLC, he worked with Executive Director Michael Evans to establish a KLC Men’s Group. He is currently studying in our Expressways 2 Success program using PLATO, in addition to taking JOBS and Parent Literacy classes.

He says working in the GED program is uplifting and helps him maintain a positive mindset. He loves meeting new people and sharing experiences to find out how they can help each other. When Rodney first came to us, he was intimidated to speak in public. But he credits Michael for helping to inspire him and today his sights are set on being a motivational speaker. He also credits Operations Manager Jessi Pavey for being one of the most supportive people in his life and for bringing him back into service. Rodney has a warm energy and is easy to talk to, and says it took years of practice to understand life and its situations. “I hope my story can help someone else,” he often says.

Rodney is currently self-employed as a barber, having taught himself at age 15. He uses his barber chair as a catalyst to counsel troubled youth. He has a long history working with kids, which is his passion. He strives to be a role model and shares his journey with them so they can recognize their potential and stay on a positive path. Rodney says, “Once I understood who I was, then I could help others. Everything in life is either a lesson or a blessing. You have to pay attention and learn. Don’t give up!” When he reflects on memories of his mother, he says, “I know she’s proud of me.”